Commercial performance is driven by better decision-making which, in turn, depends on better foresight. Unfortunately, predicting people, such as consumers, is difficult. First, they either don’t know or won’t tell how they’re going to behave. Second, if you change their choice environment, it will dramatically change that behaviour. So traditional research methods like self-report (e.g. focus groups) and revealed preference (e.g. max-diff or conjoint) have limited accuracy.

Live trials, like A/B testing or shelf-edge trials, offer a partial solution. They avoid the pitfalls because they involve real-world behaviour in the actual decision environment. But live trials also have their limitations. There are many commercial decisions you simply cannot live trial, such as those involving unbuilt features, radical price or proposition variants, competitor changes and so on. To solve these problems we developed Behaviourlab.

Behaviourlab is an immersive, online, behavioural approach that replicates, as closely as possible, the real-world decision environment that people experience in practice. Figure 1 provides more details. Like A/B testing, Behaviourlab is a randomised controlled trial method that involves recruiting participants to undertake different versions of a given task (e.g. an acquisition journey or churn decision). The different experimental conditions can then be analysed to yield behavioural models that forecast the commercial effects of alternative strategies. 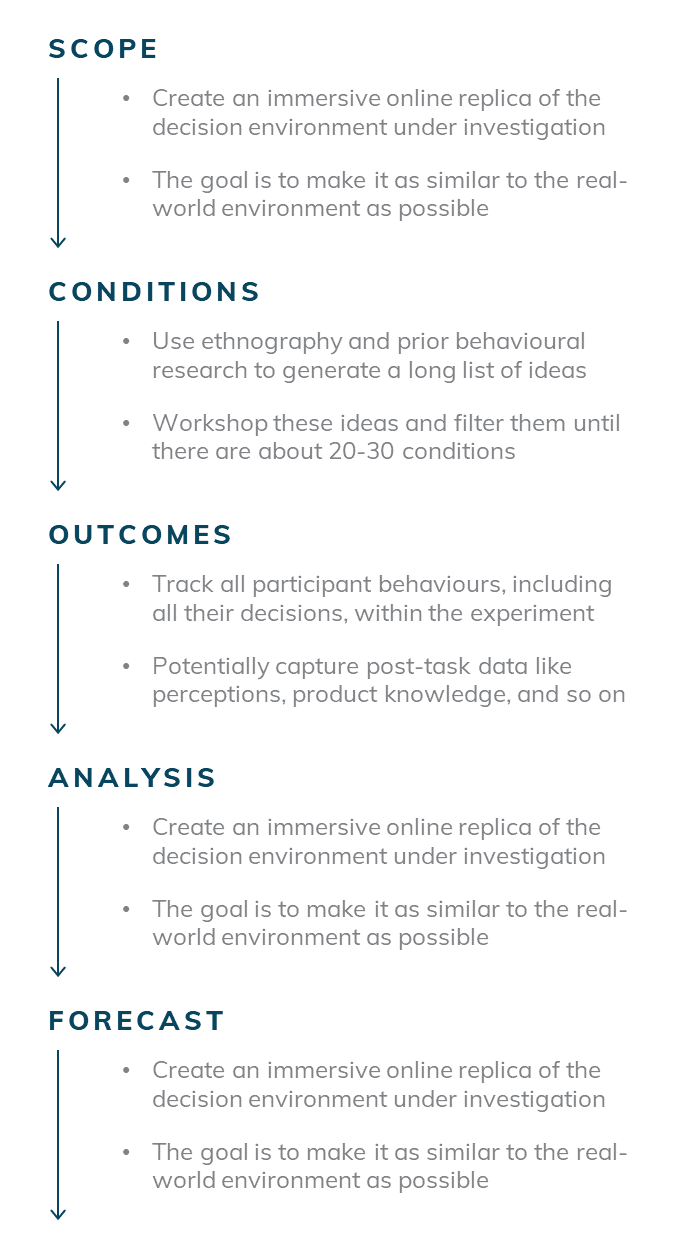 As such, the Behaviourlab approach offers various benefits. Based on client feedback, these are the five most powerful:

As Jeff Bezos, the founder of Amazon, once said “if you double the number of experiments you do, you’re going to double your inventiveness.” Behaviourlab represents a flexible and effective tool for increasing commercial innovation and thereby optimising corporate strategy.

Get in Touch if you would like to find out more.

Any cookies that may not be particularly necessary for the website to function and is used specifically to collect user personal data via analytics, ads, other embedded contents are termed as non-necessary cookies. It is mandatory to procure user consent prior to running these cookies on your website.